Some time ago I bought an HP rp5700 Point of Sale system with a 2.13GHz Core 2 Duo E6400, fascinating OEM assembly, and FreeDOS, fourth-hand – follow this Twitter thread to experience this machine as its story'd unravelled.

Some time later, I decided to make a router out of it, and, having heard of x32 – 32-bit ABI/userland, with a long-mode kernel/CPU – some time prior, that had become the architecture of choice. x32's proponents tout increased performance compared to amd64, but I couldn't care less; if you're looking for performance comparisons, this ain't it, I did this entirely because it was weird and rife with funny corner cases.

The Debian wiki X32Port page dates back to around when x32 was introduced in 2012 with such beautiful excerpts as:

The second [system] is the QEMU/Chroot guest, and it must run Debian 8/Jessie Unstable.

Which, while amusing, isn't very conducive to getting an x32 system up, nor are the outdated-at-best instructions. So this is the combination of the things I've read and tried in order to install Debian "bullseye/sid" x32 on Wed Apr  1 22:02:50 UTC 2020 (it was already 0:02:50 the next day in my timezone but I forgot to set it; oh well): 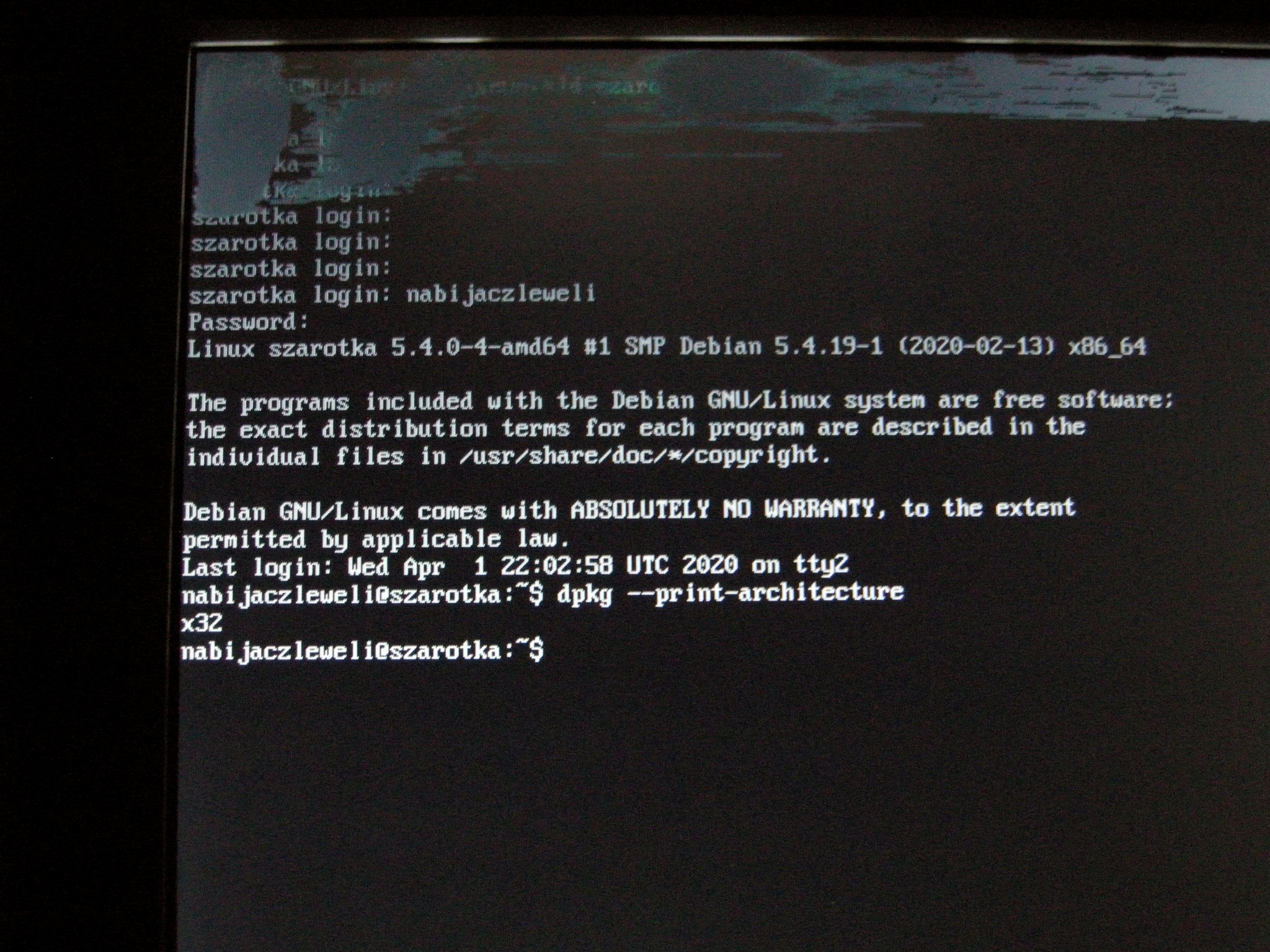 debian-installer existing for x32 would have solved most (all) of the problems with this install, but #778195 is open since Feb 2015, and dead as of that very November. The patch from message #15 applied (relatively) cleanly on top of 1ab40c5 from Salsa, barring one trivial conflict in debian/control, but I couldn't figure out how to build it for x32 on my amd64 machine (or in general, frankly).

Just for the fucks, I also tried to add and build a kernel config for x32, which ended exactly like all my kernel-building endeavours of the past (plus, tracking and building Debian updates ad infinitum sounds like a horrible time).

I also tried to cross-grade an installed amd64 system, but doing it through buster-to-sid just™ refused to work, and sid-to-sid broke on +b2 "Rebuild with ruby2.5 support dropped" binNMUs existing for i386 and amd64 but not for x32 (being a few versions behind on some packages didn't help, either), although, in the few days it's taken me to write this, it'd started to look like the rest of the architectures are catching up.

And so, it came time to install Debian without d-i, like some sort of Arch user.

Also a kernel that can run x32 binaries; Debian amd64 kernels can, but have it disabled by default, and need a syscall.x32=y parameter to do so (I looked, out of curiosity: Arch doesn't support x32 at all, Gentoo does, Fedora and RHEL don't; FreeBSD's "Linux® Binary Compatibility" does not (as of 12.1)).

I used d-i's rescue mode (rescue/enable=true parameter) and added syscall.x32=y in the bootloader manually, this allowed me to use d-i for some of the annoying config parts (hostname, network), and PXE-booting it was the most convenient for me.

In (reverse-)chronological order: a disklabel, a bootloader, an initramfs (generator), a kernel (at time of writing this means Linux, since FreeBSD is i386/amd64-only on x86, Hurd is i386-only), an init, a user, configs – /etc/fstab, /etc/hosts, timezone.

My target disklabel is a standard GPT-on-BIOS setup with a separate /boot (this helps by allowing the use of partlabels throughout, since SZAROTKA-BOOT is longer than the vfat maximum of 11):

Pressing Tab in ISOLINUX et al. pops up the command-line, which looks vaguely like this:

Going through the rescue up to this menu ensures all the small annoying things are configured: 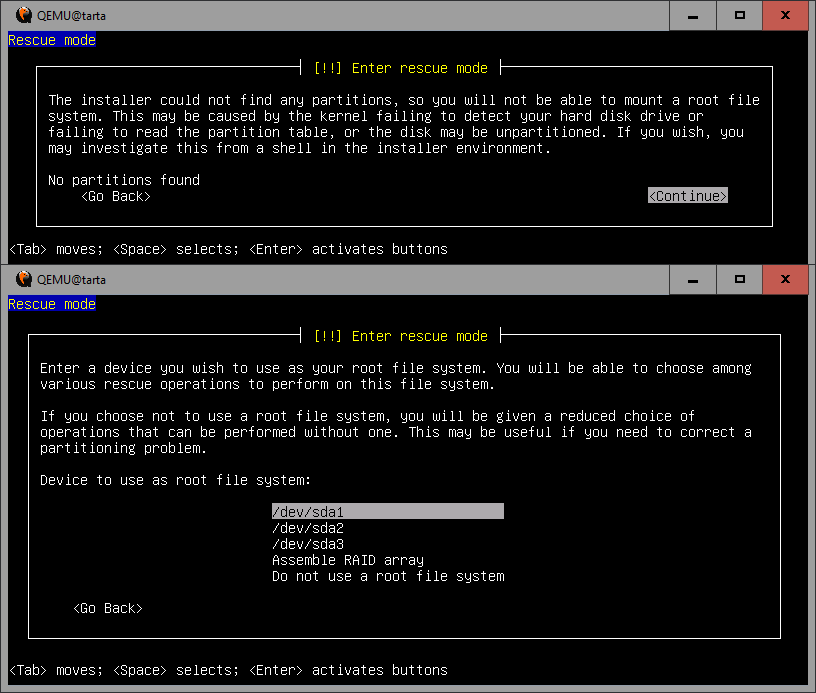 You can press Alt+F2/F3 to switch to a virtual terminal with a usable background and $TERM.

This should ensure the system boots and is usable enough after doing so — press Ctrl+Alt+Del and find out!

If that didn't get your system to boot, please do shoot me an e-mail, but if it did, then that's all from me for today, except, maybe, one last thing?

Ever wondered what'd happen if you had inits but the kernel couldn't execute them? So did I: 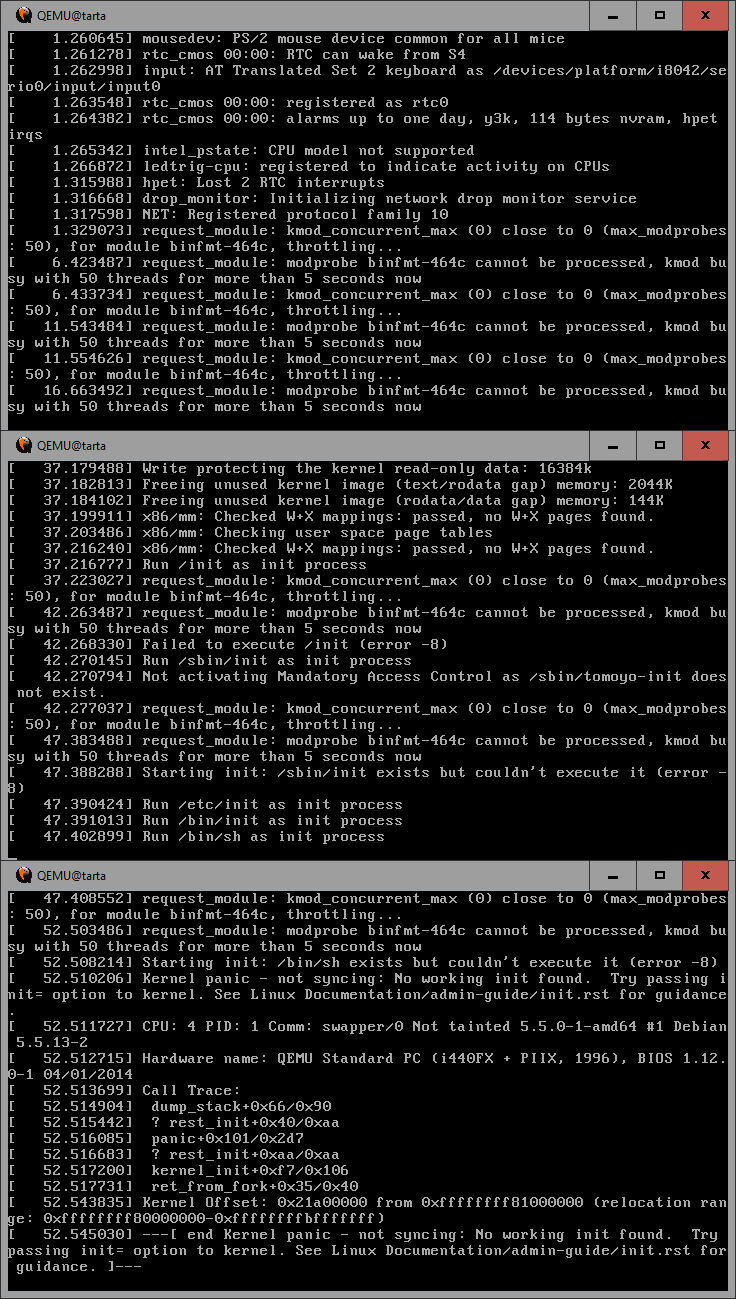 0 words, 0 syllables, 0 characters. Creative text licensed under CC-BY-SA 4.0, code licensed under The MIT License. This page is open-source, you can find it at GitHub, and contribute and/or yell at me there. Like what you see? Consider giving me a follow over at social medias listed here, or maybe even a sending a buck or two patreon my way if my software helped you in some significant way? Automatically generated with GCC 5‍.‍4‍.‍0's C preprocessor on 15.03.2021 23:02:07 UTC from src/blogn_t/001-x32-in-2020.html.pp.
See job on TravisCI. RSS feed