I was quite taken by the xerox sigma 9 tape decks, in particular the right one from lcm+l's collection. Naturally, it was gonna be for a different thing, but after spending >10h modeling it in everyone's favourite Computer-Hindered Modelling suite (Illustrator), it's no longer fit for purpose therefor. 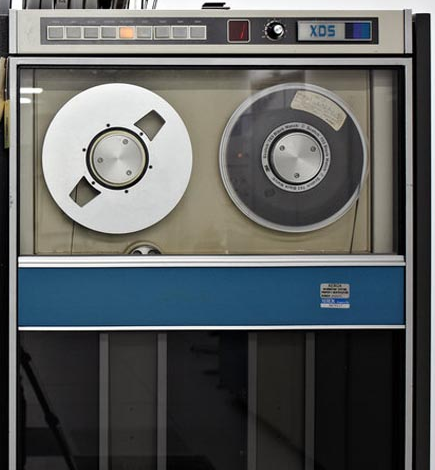 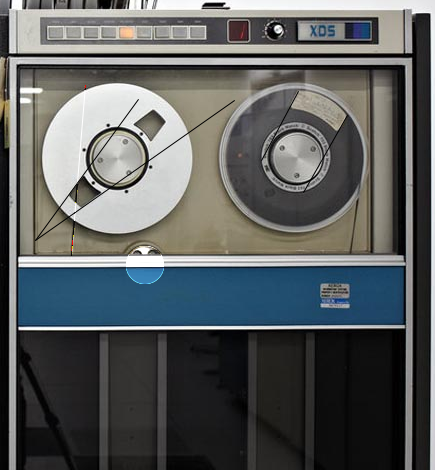 Some may call this "shit", and it is, but it's also sufficient, if you dis-count the text, any details below the fold, and perfect dimensional accuracy:

The keen-eyed viewer might also notice that the text above the buttons is missing. I've also just noticed, so call this an erratum.

The only very obvious text is the big xds branding (represented by AMIX topaz, previously featured on this blog, with squished kerning and horizontal scaling), and the 3m on the removable spool (likewise, but nominal proportions).

The text on the name-plate is, naturally, just rectangles, but both pieces of text on the spool are (represented by AMIX sunfont, likewise, nominal proportions. They are sensibly lorem ipsumed to reproduce the average colour of the original. I overfit to "tops-10" for some reason in my late-hour delirium. Given that this isn't a dec system, it definitely isn't that; but it fits dimensionally, so.

One bit that may not be obvious (well, I know from looking at it that it isn't, especially in blue winter lighting) is that the tape itself has a ferric tint, which doesn't come out all that amazingly when actually printing, and I appear to've been mis-led by the deCMYKer.

Naturally, I hesitate to call Illustrator a CAM program not for no good reason: the cut-outs on the permanent spool, well, aren't, because you only get one level of booleans at any time, so it's actually just the back-drop repeated on top of it. Like-wise, the tape going from that spool to the vacuum column is two different chunks, because the bottom one is at a layer below the spool, and the top one is at the front. Booleaning that correctly turned out to be impossible as well, so the clip mask consists of vertices cut out from the intersection of the rhombus that limits the circumferences and the double-circle that defines the radial dimension, and pasted together.

Originally, my complaints were limited to "waa why can't I actually spec any dimensions", but maybe I'm spoiled by actual parametric CAMs, or "why do I have to bang in the sin/cos to get a line with a precise angle or length", or "why can't make a line's stroke be on one side" (you may notice that the tape coming off the removable spool actually leaves it from within the body, rather than tangentially, for this reason), but this is, frankly, embarrassing; is this really what the monopoly's Best (only?) Vector Lay-out Product is capable of?

This can then be scaled to a height of 85 (derived, naturally, from "what'd fit on my palmtop"), yielding a width of 44.13. Given the five natural columns and the 5-character length of xerox and sigma, the obvious ligma can be added, as well (AMIX sunfont, even ⅑th font-height, nominal proportions won the popular vote): Yes, these are PNGs; post-scaling, the SVG export suffers horrific precision loss, esp. on the name-plate.

Print-ready CMYK PDFs, raw Illustrator models, &c. can be had here. CC BY 4.0.

But, if printing, and scaling text that's supposed to be normally-readable on a roll with a, like, 400 physical dimension or whatever, just how small is it gonna be? Thankfully, all is possible through the power of НАТУРАЛИСТ микроскоп детский 60×, which passed its factory QC in January 1987. 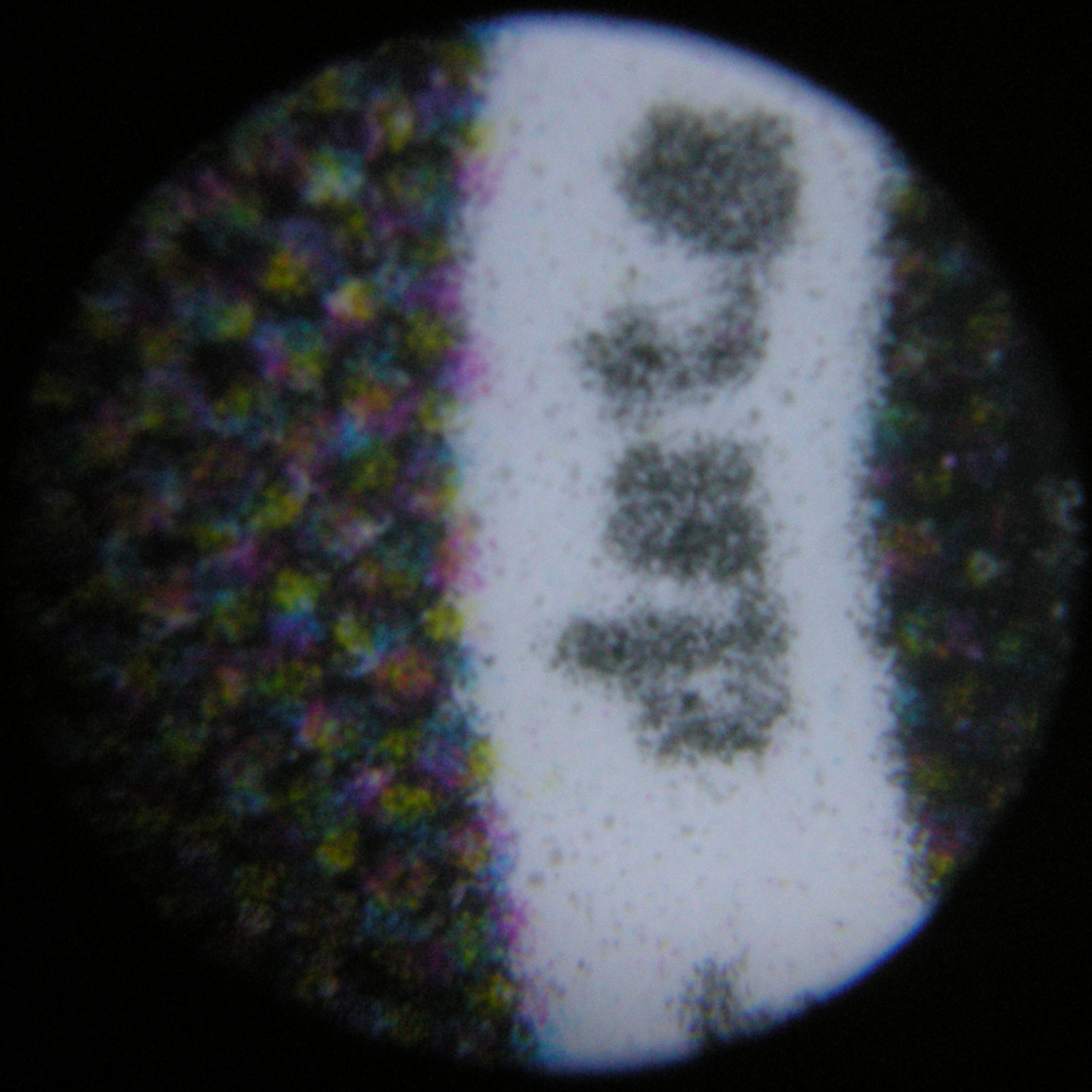 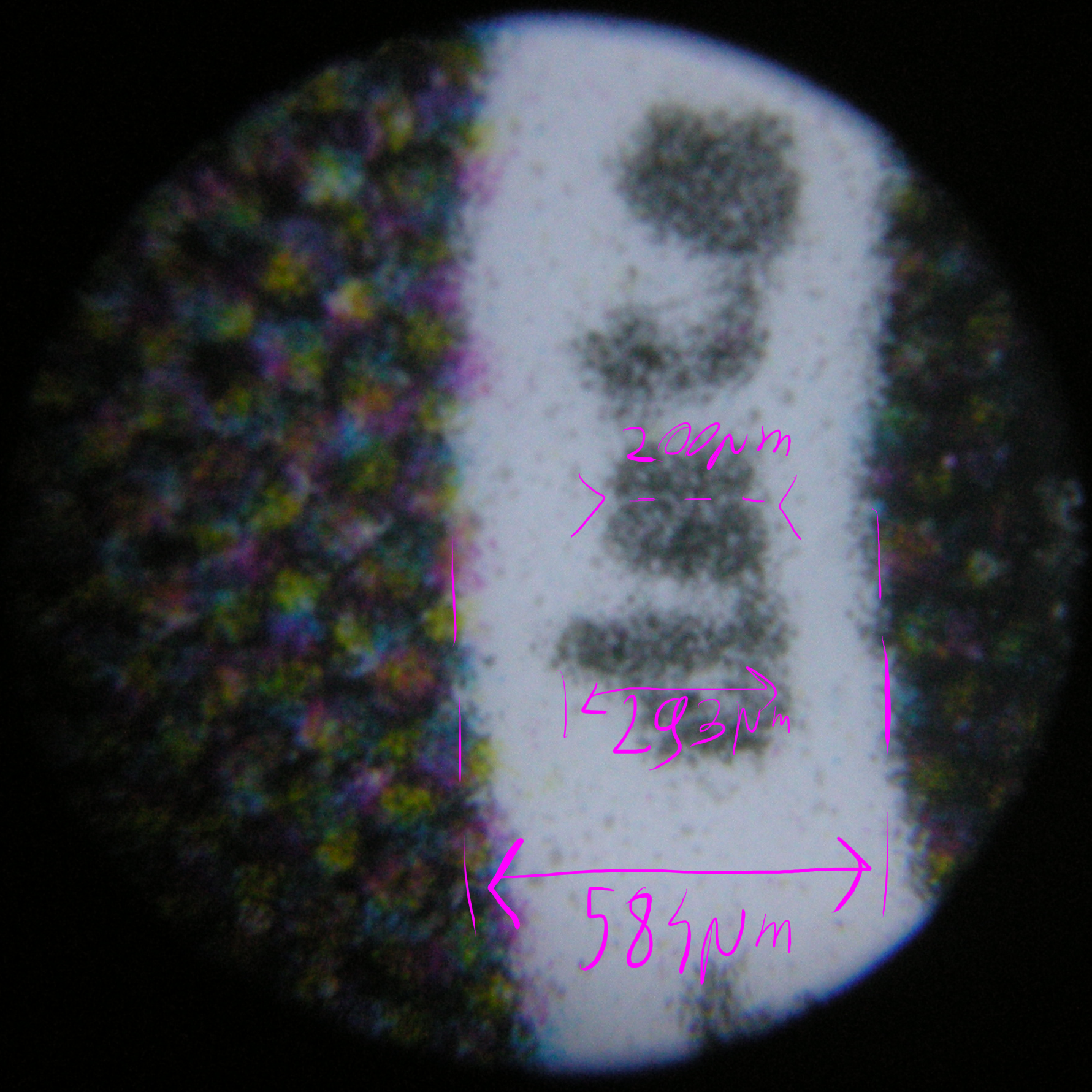 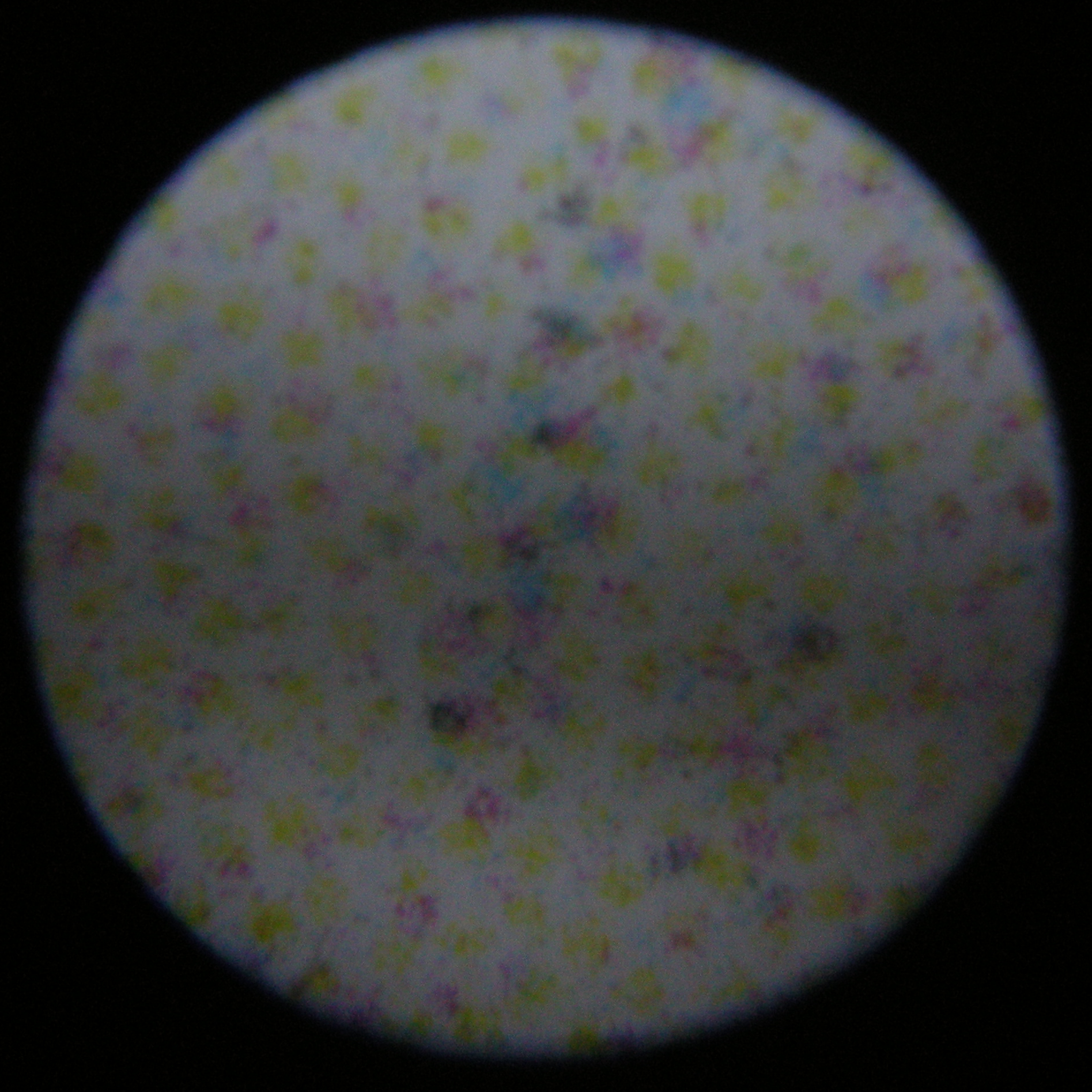 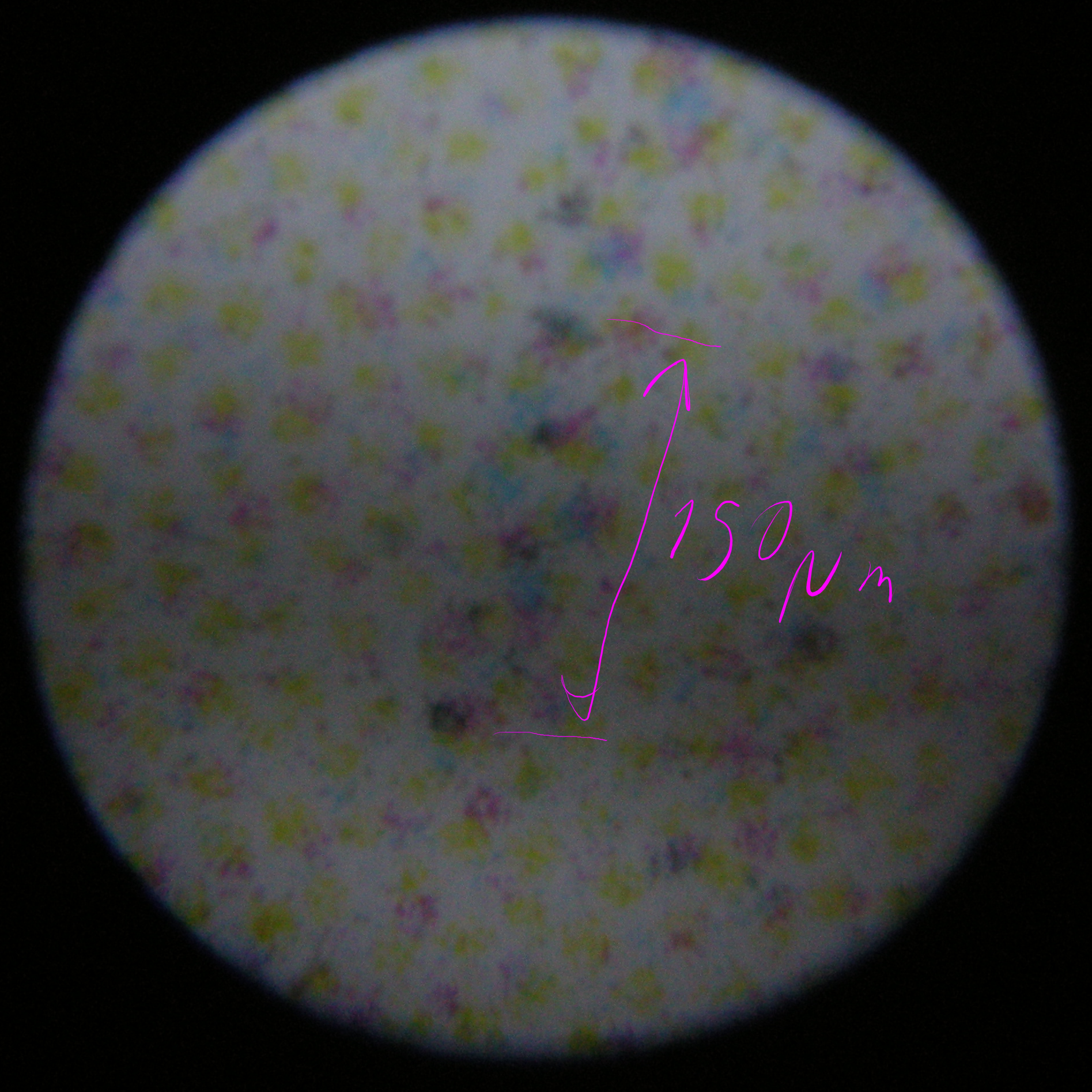 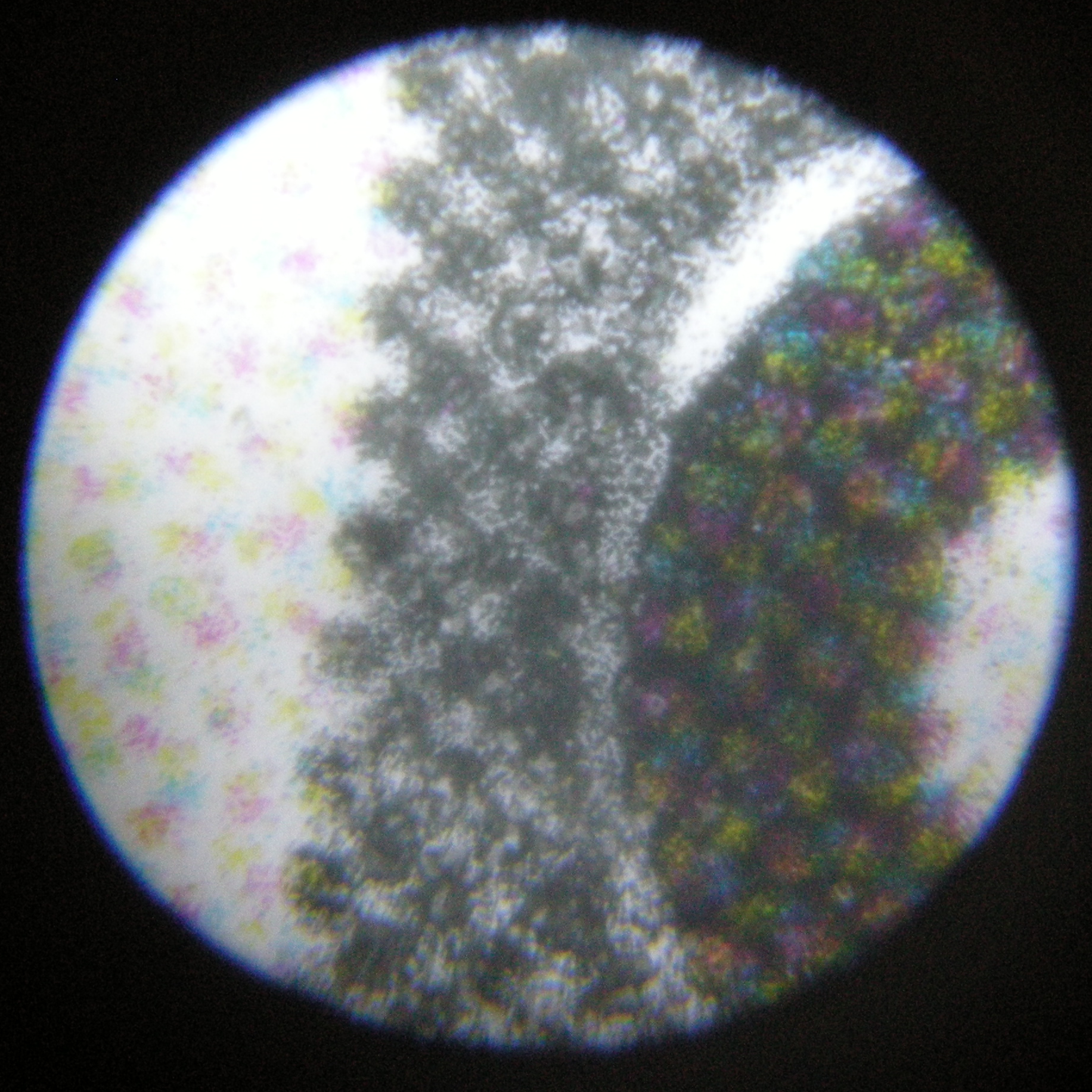 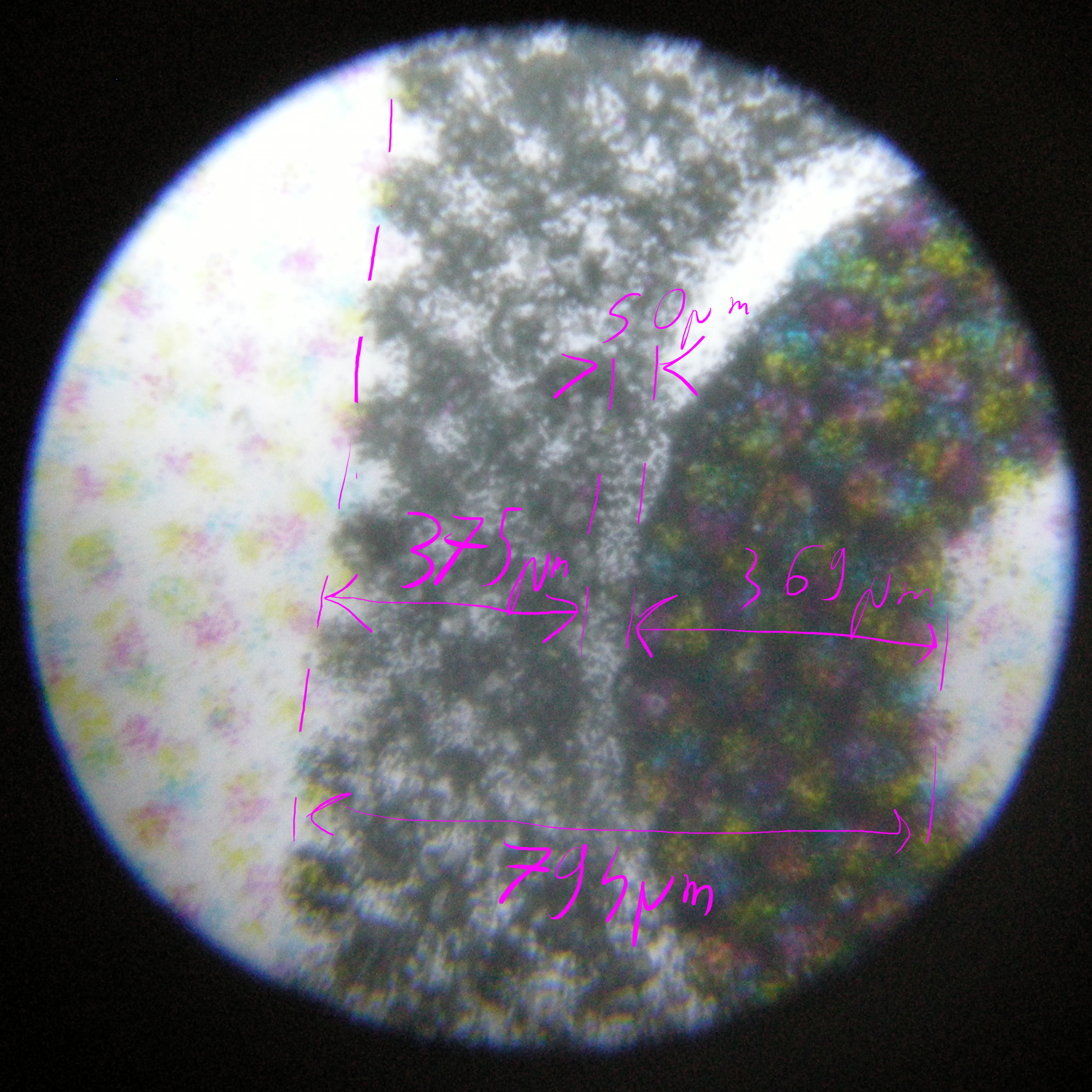 The manufacturer's label is just about sharp enough to read it with the naked eye (undoubtedly assisted by taking my glasses off, since comparative analysis against mother's fresh surgically-implanted zeroed lenses shows that she can't see shit). Conversely, the 50-micron drop and black-on-white to beige-grey-on-beige contrast downgrade yields absolutely nothing, it's a wisp, and that's better.

Given this analysis, we can make another observation, namely that the top resolution of this process ends up at appx. 50μm. The nominal advertised resolution is 300-350DPI, which is 85-72.5μm, for a ⅔rds' bump of black-on-white resolution over advertised; pretty good. Additionally, we can observe on my print shop's process listing that they printed this on a xerox versant 180 press, which funi. 0 words, 0 syllables, 0 characters. Creative text licensed under CC-BY-SA 4.0, code licensed under The MIT License. This page is open-source, you can find it at GitHub, and contribute and/or yell at me there. Like what you see? Consider giving me a follow over at social medias listed here, or maybe even a sending a buck or two patreon my way if my software helped you in some significant way? Automatically generated with Clang 14's C preprocessor on 01.12.2022 16:36:37 UTC from src/blogn_t/009-XEROX-SIGMA-9-balls.html.pp. RSS feed